The article states that:

"The Grand Line is the ocean current that follows an imaginary line that runs east to west across the middle of the world and perpendicular to the Red Line. In effect, it's the equator in the world of One Piece. The Red Line is a vast continent that circles the globe from north to south and functions as a Prime Meridian." 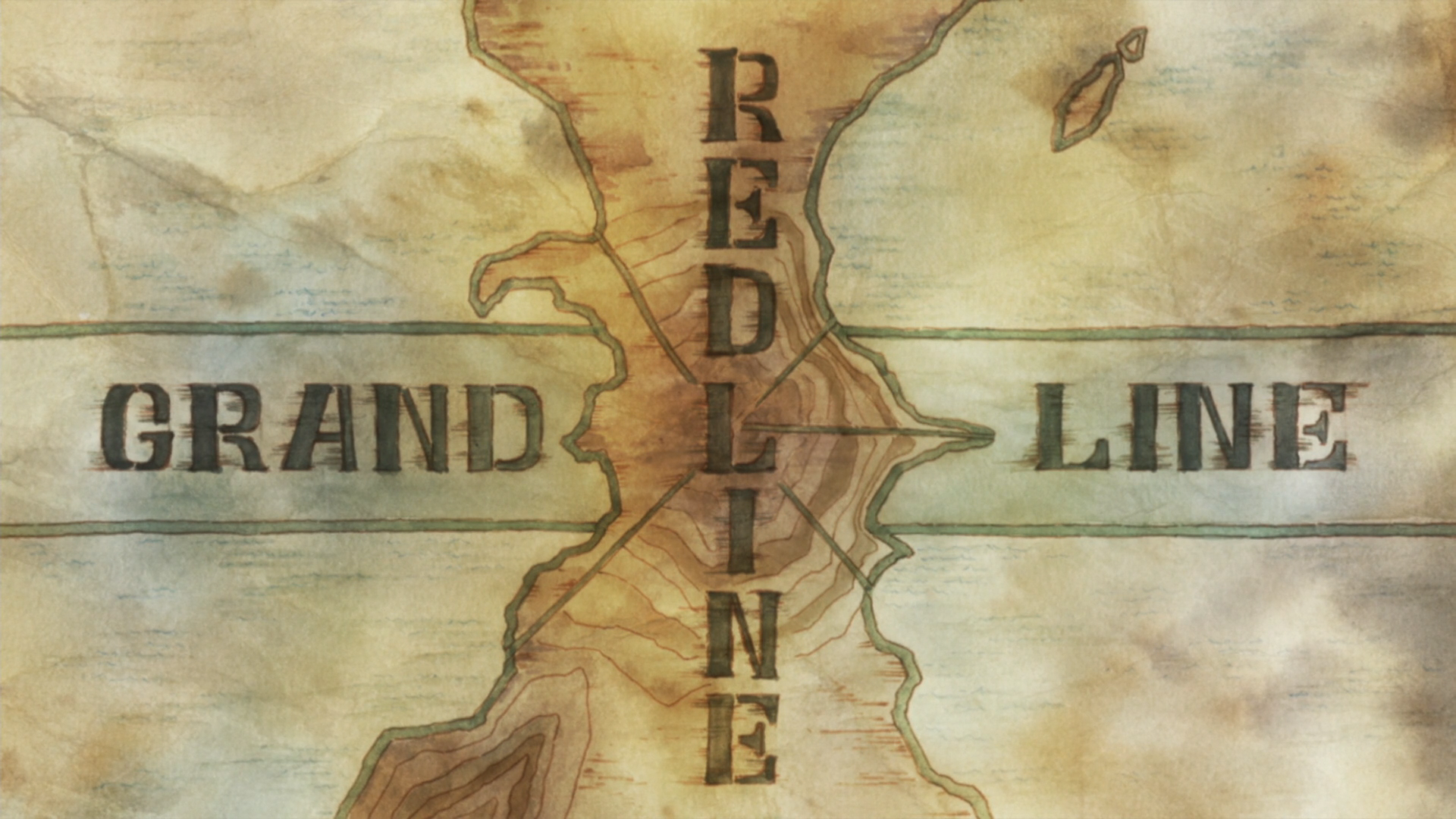 That is wrong. It is seen on the map that Grand Line runs from north-west to south-east (and thus is not, strictly speaking, an equator), and Red Line stretches from north-east to south-west. Ruxax 22:39, April 27, 2010 (UTC)

There are various maps of the world, but they all are rough sketches. However, the names of the four blues somehow support your theory. On the other hand, the real-world calm belts are located along the equator. El Chupacabra 16:27, April 28, 2010 (UTC)
Because the Red Line circumnavigates the globe as just as the Grand Line does, from one point it will be going north-west to south-east, and from the antipode point it will go the other direction, what doesnt seem clear is which antipode is reverse mountain and which is Mariejois. yoshiyuki17. October 13, 2010

ok sorry i need help with this. ok lets say im drawring the grand and red lines on a ball but ill tillt it so insted of diagonal lines were working with a vertical (red) and a horizontal (grand). now on opposing sides of the red line there is revers mountain and the marine headquarters (marij-something sorry u know wat im on about though the place that the sabody archapelo is were the supernovas are first mentioned) now im really confused, the strahats have already passed revers mountain and once they get back together i understand there objective will then be to get passed the marine base via fishman island, wont that mean there on the same side they started on? maybe im drawring this up wrong does anyone feel like explaining it.

Is it worth mentioning that there is no described way for leaving the grand line? the seastone-lined ships are implied to be relatively new, but beyond that the manga doesnt state how pirates sail from the grand line to other oceans, like shanks seemed to early in the series. yoshiyuki17 October 13, 2010

True seastone ships are fairly new, it could be fairly simple to line your ship with it. As for actually exiting the Grand Line, there may or may not be a way to do that. At the very least there is a way to go back through it. Those pirates that Kid killed in the New World said they only wanted to get back to paradise (the first half of the Grand Line) alive, implying there is a way to travel the Grand Line in the opposite direction. The Calm Belts appear to lead out into one of the Four Blues.DancePowderer 00:23, October 17, 2010 (UTC)

yes that is true as well, it must be possible to travel more or less freely back and forth through the grand line. perhaps its simply using the log pose in the opposite direction. on the other topic i think there IS a way, it just hasnt been elaborated upon. Shanks was on Gold Rodgers crew, so presumably he was on the grand line with them, and then appears in loguetown and Luffy's hometown, so he left the Line at some point. The movie Strong world also states the Straw Hats were leaving the Line, which is a canon movie. so there is a way it just hasnt been stated. i suppose my question is should we make a note of it on the main page?yoshiyuki17

In the 15th anniversary's book the "Paradise" is named as "Paradice". There's the pic:

Is this map of One Piece World valid?

I don't know how to take images from manga or anime but we could do better than just a list and we don't need to add cities or landmarks when Naviboxs and "Layout and Locations" sections can take it from there. A gallery, or something, would make things easier to search the "Places in the Grand Line" section.Rgilbert27 (talk) 11:27, January 19, 2020 (UTC)

I'm not sure a gallery template is particularly helpful for a list of locations. A table would probably be better. Kaido King of the Beasts (talk) 04:33, January 21, 2020 (UTC)

Retrieved from "https://onepiece.fandom.com/wiki/Talk:Grand_Line?oldid=1665994"
Community content is available under CC-BY-SA unless otherwise noted.