This guy seems very similar to Wesker from Resident Evil, mostly by their voices and their planning styles. 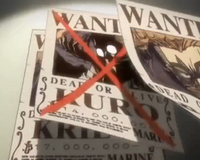 I've been wondering, where did the

That's a good question, I can't find any references for it either here or on the bounty page.DancePowderer 02:21, August 7, 2010 (UTC)

I've been re-reading the early manga, and in it (as well as written in the article), Kuro's men cheers for him calling his name. However, he scolds them saying he wishes to abandon this name. He no longer calls himself Kuro, even though this is his true name. Isn't the reason the article of Cutty Flam is called Franky because he abandoned that name? I think this article should be renamed Kurahadol, as this is the name he seems to prefer to go by. uknownada Talk 16:39, November 1, 2012 (UTC)

Near the end of the top section on Kuro's page, it says that he is still captain of the Black Cat pirates. When was it confirmed in the Manga that Kuro is still the captain of that pirate crew? I mean yes, in the Anime it was confirmed in the episode where Luffy first got his 30 000 000 bounty, but that was only in the Anime. I certainly thought that it must have been mentioned in the Manga, for something in the Anime to be considered cannon. As I see it, this bit of information has not been confirmed in the Manga, which in turn means the fact is non-cannon. I know that non-cannon stuff should be described in pages yes, but shuldn't we do something to make the fact look non-cannon, so that people can know that it actually is. WonderfulUnicorn (talk) 14:12, January 29, 2013 (UTC)

Yeah the Anime and Manga differences says correctly that in the Anime he is still the captain of the Black Cat pirates and that in the Manga he's not. But that's excactly why I am wondering why it says near the end of the upper section at top of Kuro's page, that he is still captain of the Black Cat pirates, which he is not because that fact is just non-cannon. Should I change it to former captain? WonderfulUnicorn (talk) 17:10, January 29, 2013 (UTC)

Is there any official source for the "Kurahadol" spelling of his Butler name? We're supposed to use official spellings and the like, but this spelling looks like a certain bit of Fans making stuff up. Not unlike all the issues around Oars' name when it was first revealed (Oz, Odz, Odr, etc) I move we either do one of the following:

1: Make the official English name, "Klahadore" the standard, it's 100% accurate

2: Make a direct romanization of "Kurahadōru" the standard

Either way is fine, but going with a fan spelling "Lol just because" when there's no Databook entry, English text in the manga, or possible namesake to back it up makes no sense. Also, fansubbers don't count as an official source, especially when the exact same fansubbers were not very good when they did that part of the series by their own admission ("Gomu Gomu no Kane" does not translate to "Gomu Gomu no Iron Headbutt")DemonRin (talk) 03:19, March 1, 2013 (UTC)

We don't use official spellings. We use original translations or fansubs. Klobis does most of it. JOP use to do a lot but she doesn't edit much. SeaTerror (talk) 03:21, March 1, 2013 (UTC)

I'm no translator, but where exactly does the basis of "Kurahadol" come from? Did one of our Japanese users even name that? uknownada Talk 03:26, March 1, 2013 (UTC)

It's just like Victory Cindry, Bikutoria Shindorī, you figure it out based on the romaji pronunciation. Yata Talk to me 03:40, March 1, 2013 (UTC)

Someone explain to me real quick something, because I'm lost.  And I'm not asking this to be difficult, I'm genuinely curious and would like an honest answer.

When the FUNimation/Viz spelling works perfectly, there's absolutely no issues with it,  it matches the Japanese 100%, and there's no Oda/Shueisha/Toei written spelling in a Databook somewhere, why can we not go with it?  What is the issue there exactly?  Because it seems to me that when there's no contradiction or issue, then using said spelling would be more unified than having to specify that there are 5 different spellings of X character's name.DemonRin (talk) 04:00, March 1, 2013 (UTC)

The names get mentioned either way on the Name Variants article. The way we do names is like this:

I'm not asking what the policy is, I'm asking why that's the policy.  What is the logic behond having the Viz and FUNimation spellings behind unofficial fansubs/scanlations which are all done by different people with no level of consistency.

I'll admit, sometimes Viz and FUNi do some weird stuff with the names. Merry Go, Zolo etc. but those are not what I'm asking about.  What I'm saying is, when Viz and/or FUNimation translate something 100% accurately and there is absolutely positively 0% problem with their rendition of the name, why can't that take precedence over something fans literally just made up because it sounded about right to them?  Wouldn't it be more consistent and neater to try to consolidate and compromise on as much of that as we can?

Plus, there are noted examples where Viz/FUNimation did it right before Oda revealed it, and they ended up being right.  IE: Viz/FUNi - Dracule Mihawk, Fansubbers - Juracule Mihawk, Green Databook: Dracule Mihawk.DemonRin (talk) 05:18, March 1, 2013 (UTC)

The priority order "Manga > SBS > Databooks > Anime > Original translation" is indeed standard (and fairly logical), but the rest of ST's list is 1) not official to my knowledge, and 2) debatable at the very least.
If I'm wrong about the first point, I'd be curious to see where it is stated. One_Piece_Wiki:Name_Spellings doesn't even mention scanlation/fansubs as a valid source. sff9 12:40, March 1, 2013

http://onepiece.wikia.com/wiki/Talk:Mt._Colubo Yata himself said it. Part of it was edited by me, obviously. That list was supposed to be thrown in the MOS forum at one point. Also Nada, it's flat out wrong to say we don't use fansubbers over official English versions. SeaTerror (talk) 17:50, March 1, 2013 (UTC)

Yata is not an official policy, and note that he forgot to specify that we favor "original" romanizations if they seem more fitting than scanlation/fansub romanizations. So I'm not convinced.
Anyway, I can see the point of this list, and it's that we don't have to use VIZ's or FUNi's romanization if we think another unofficial one is better. However, it does not mean any romanization used by VIZ or FUNi is automatically forbidden. In my opinion, we should use the direct romanization, Kurahadoru, since we seem to have no means to decide the best among Klahadol, Klahadole, Klahadore, Klahador, Krahadol, Krahador, Kurahadol, Kurahador, etc. sff9 18:36, March 1, 2013

"Kurahadōru" Yata said that's where Kurahadol came from and it makes the most sense. We should keep it like that. Also I never said Viz and Funimation translations were forbidden. We just would most likely not use them since we have a big list of things to use first. SeaTerror (talk) 18:38, March 1, 2013 (UTC)

Wait, does Kurahadol mean anything in English or in another language? If not, then I fail to see why it makes more sense that Krahadol or Krahador or whatever combination. sff9 18:45, March 1, 2013

It was probably shortened on purpose. I don't know why they did it. It's the best we have for now. It does show that Klahadore is wrong though. SeaTerror (talk) 19:10, March 1, 2013 (UTC)

Uh... yes it does... R and L are interchanagle in Japanese, it's why 4kids and Viz thought "Zolo" was a proper romanization of Zoro's name (It would be if Oda hadn't clearly written "Zoro" consistently everywhere).  So "Kulahadoru" is just as accurate as "Kurahadol".  Now, Japanese doesn't have any flat consonants besides N, every consonant needs a vowel after it (it's why Usopp is written "Usoppu", Tom is "Tomu" in Japanese) and even when it's there, you quite often don't pronounce it (Yusuke, Sasuke, to name a few common Japanese names where this happens) In fact, you yourself did this in your breakdown of it!  So take out the Us.  What do you have? "Klahador".  The added "e" at the end is just a pronounciation guide, and is pretty much silent.  You would pronounce "Klahadore" as "Kla-hah-door", there's absolutely positively nothing wrong with it, it fits perfectly. You... seem to understand little about Japanese, Romanizations, and pronounciation...DemonRin (talk) 19:04, March 2, 2013 (UTC)

You're the only one who "doesn't care" ST. Her statements are completely valid, so stop writing them off.

Ok then, my Vote is for "Klahadore".  I think moving towards a bit (not complete, just some) more uniformity with the terms the English versions got right is ultimately better and more concise.  Whereas otherwise it's just being different for the sake of being different.DemonRin (talk) 20:35, March 2, 2013 (UTC)

Stop bringing up false arguements.  The two situations aren't the same.  Oda wrote "Bon Kurei" on his wanted poster but he never wrote any English transliterated version of "Kurahadoru".  Ever.  In fact, no Japanese source has.  There is literally no precedent for any spelling of Kuro's butler name whatsoever.

I SPECIFICALLY SAID I'm only talking about terms in which the English version "got right" where there are "No Contradictions or issues"  Do you read my posts?  Again, I'm talking about instances in which there IS NO CONFLICT.  With Bon-chan, there is a CLEAR conflict because Oda trumps all, and Oda wrote his name out.

I'm starting to think you don't actually read any of the points I'm trying to make and simply oppose me on principal because you don't like meDemonRin (talk) 21:01, March 2, 2013 (UTC)

Since some editors are demanding otherwise, then I think it's wise to put it to a vote. We don't want want any conflicts later. Below is a rough draft, we don't start yet. Yata Talk to me 03:45, August 15, 2013 (UTC)

Poll should not have been started. The poll literally came out of nowhere. The discussion died and then all that was said was all of a sudden was "START A POLL". There's a lack of votes because people did not see it. SeaTerror (talk) 06:27, August 16, 2013 (UTC)

It is when most of the people who would vote haven't even voted nor know it exists. The point is discussion should have started again first. SeaTerror (talk) 06:36, August 16, 2013 (UTC)

No it is because discussion never actually started again. That is how polls get noticed. SeaTerror (talk) 06:39, August 16, 2013 (UTC)

If anything there shouldn't be a poll because there's a clear majority here in the discussion. Even the poll so far shows that only ST is against the change. JustSomeDude...  Talk | 15:22, August 16, 2013 (UTC)

Because I also notice another annoying thing: ST doesn't stand up to something until after it's enacted, then he raises a fuss. Yata Talk to me 00:37, August 18, 2013 (UTC)

Oh hey, I didn't see this one. Good thing Klahadore won, then. But if Oda or Toei ever romanizes it to Kurahodul or however it's spelled, are we going to change it back? uknownada Talk 02:02, September 22, 2013 (UTC)

Time of attack on marinesEdit

In the Viz manga, it was three years before the main story that Kuro killed the marines and got "captured", not five years. This is supported by him staying with Kaya for three years as well. Aassdddai talk 00:52, December 10, 2014 (UTC)

On page 15, 5th frame, when cage was stopped, there's man with same glasses, hair and costume as Kuro and patch on face. Could it be him?

Afraid not. I admit it bears a striking resemblance, but we have no proof that it's Kuro. Also, you have to remember that this is in the New World, while Kuro has only ever been in East Blue.

Retrieved from "https://onepiece.fandom.com/wiki/Talk:Kuro?oldid=1542202"
Community content is available under CC-BY-SA unless otherwise noted.