Based of the Forgotten One?Edit

In a game called castlevania: Lament of Innocense there is a secret boss that amazingly resembles him(same color, height, found also in a tower, the hornish jaws, the lost arm,....) even thriller bark resembles the castle in castlevania

Many creatures resemble oars, his devil/demon like look is found in many games / books / movies. 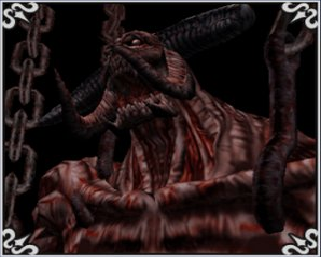 Then this one? I don't think there are enough similar to be mentioned, I mean the similarities are in common with many monsters giant then, but that's my opinion. leviathan_89 11:52, 28 July, 2011 (UTC)

i don't know, i see many similarities(even the thing about the arm and him almost destroying the world once+ the hole in his belly) but indeed many monsters are similar --The Humaniod Typhoon 12:26, July 28, 2011 (UTC)

i'm curious about something, when did funimation refer to him as Oz? i remember fansubs using that term years back, but now everyone uses the name "oars" most of the time. AsuraDrago 16:08, September 26, 2013 (UTC)

It wasn't just the subs, it was the scans before them too. It wasn't until Marineford that we learn it was Oars.DancePowderer Talk 16:12, September 26, 2013 (UTC)

Oars should not be listed as Oz in the funimation version.  In a recent interview for the One Piece Podcast Colleen Clickenbeard referred to him as Oars when talking about the dub (as well as confirming she is his voice actress).  He has not appeared in any dub episodes or anything dub related either, so he would not have been referred to as Oz prior to now.  (98.172.60.198 05:42, March 20, 2014 (UTC))

Oars is completely wrong. I checked and オー is pronounced like "oh" and ズ is zu not su meaning that the name is Ohz, the name Toei uses (not saying just because Toei used it, it's correct) Meshack (talk) 08:34, August 11, 2016 (UTC)

Retrieved from "https://onepiece.fandom.com/wiki/Talk:Oars?oldid=1361578"
Community content is available under CC-BY-SA unless otherwise noted.