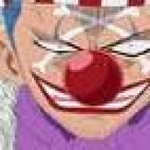 Persian13 is a nice young woman who live in a small city (or maybe it's a big town?) in the Québec province. She live alone in an appartment with her cat called Rouky.

Persian13 is a short and chubby girl, but she don't care much about her chubbiness. She have very short brown hair and her eyes are dark brown, so dark that they often seem to be black. She's almost always smiling. She also wear rectangular green-framed glasses. Without these glasses, Persian13 is almost blind and can barely see a few feets away.

Persian13 is a nice, sweet and fun-loving girl. She's open-minded and she never "judge a book by it's cover". She can stay calm even in stressful situations and it's almost impossible to make her angry. Though she's way less shy than she used to be, she still retain a bit of her shyness. She's also a closet pervert... Well, she don't hide her perviness on the net since no one know her, but she hide it in real life.

There's not much to say about Persian13's relationship. She haven't see her mother in years. On the opposite, Persian13 get along very well with her father and see him often.

Persian13 is a fast learner and have a great memory. She have HUGE amounts of informations stocked in her memory about anything and everything.

Persian13 seem to have the abilitie to calm peoples around her. She also seems to attract cats.

Some of them are french or french canadian book series so you might not know them.

Retrieved from "https://onepiece.fandom.com/wiki/User:Persian13?oldid=556317"
Community content is available under CC-BY-SA unless otherwise noted.