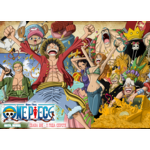 This is my first article as Rainbowman. I am writing this article so I can introduce myself. I am a male fan of One Piece. My age right now is 26. The reason for my username is because my favorite color is rainbow (Basically Red, Orange, Yellow, Green, Blue, and Purple). The reason I like those colors is because they represent Optimism and Unity. But don't think that I am gay (homosexual) because I'm not into that stuff. I am however interested in lesbians- the kissing, the way they rub their breasts together, and how one woman suckles on the other woman's breasts. When it comes to anime females, I like those who have thick eyebrows, big muscles, glasses, round foreheads, ponytails, pigtails, or even sideburns (which is different than how males have sideburns) all of which have breasts (and possibly butts) that jiggle and bounce. I also happen to be a maeiusiophiliac (someone who fetishes over pregnant women) because I like pregnant bellies- how big they are, the texture, the way they rub against each other, and the way they jiggle and move (I hope none of you can hold that against me whether you're just jealous or think I'm a sicko). In addition I like how the breasts lactate. But enough of this stuff, I'll change the subject. My favorite animal species is the feline (cat). My lucky numbers are: 0 (an important number I'm sure), 3 (number of the trinity and trilogy), 6 (number of the colors of the Rainbow as seen in most medias), 9 (highest number digit and the supposed lives of the feline), and 12 (number for the clock, calendar, and zodiac). The game genres I like are platformers(i.e. Super Mario Bros., Warioworld), fighting (i.e. Super Smash Bros., Mortal Kombat), profile collecting (Pokemon, Digimon, Viva Pinata) and possibly racing (i.e. Mariokart: Double Dash). The movie genres I like are Fantasy, Adventure, Animation, Comedy, Action, Sci-fi, Romance (sometimes), Drama (sometimes), Musical (sometimes), and Horror. That's all for now folks ("Merry go round broken down" playing).

Animals (according to Oda)

Retrieved from "https://onepiece.fandom.com/wiki/User:Rainbowman?oldid=697286"
Community content is available under CC-BY-SA unless otherwise noted.