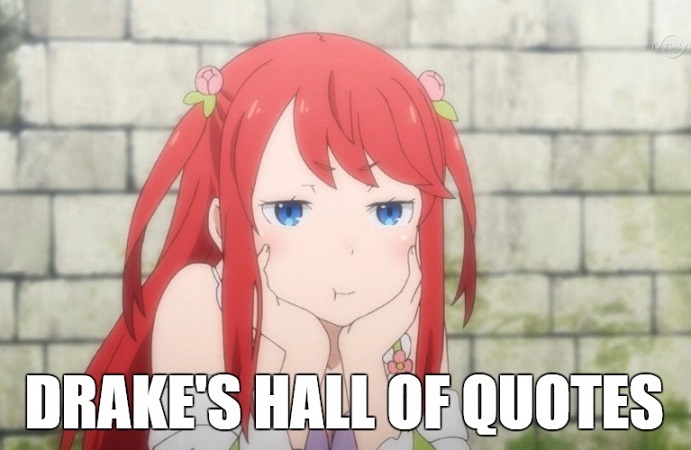 "Back in the late 1800's, a man once said "Fuck, I wish I knew what that Irish girl looked like." And so the camera was born." The Guy who Caught them All

"Then, Drake transformed into a fire-breathing ghost dinosaur with gatling guns for arms." A man with experience ( ͡° ͜ʖ ͡°)

"I had recently reconciled my differences with my father, we live in different states and it was a great tool for us to bond" MoM's attempt at gaining pity from customer service

Because being a Shichibukai is fun. A good Swede

“Catalonia is a country, free of charge, for a few days. ” A person who makes Dressrosa sound like paradise

"Fact: self pity is the most abused substance on the Wiki.” This guy

"Hey, I didn't go to 'Nam to get my rights taken from me! I'm a citizen of the United States of Wikia! I will not be treated this way. I know my rights"

"officer, I didn't SMOTHER her, I ASPHYXIATED her! It was science, not murder!" The man, the legend

"i was triggered by Drake" Captain Portugal

"Every school is a tinder box and it's your god given right to burn it down." A good Aussie

"i'm not Mexican" Some Murican

"when Skyrim came out i got scared of bird shadows. they might be dragons" A man I respect

"my titties are so calm they're stiff" A man named Fin

"i have a bigger drinking problem than nova, i can't afford alcohol" Oh Murica

"Kaido, take that fucking Santa hat off and go back to the Totoro naked lady." Some street fighter

"A vegan, an atheist, and a gay walk into a bar. I know because they announced it" "my boss"

"I like my guys with their pants on. Preferably shirts on too" Something an Italian doesn't hear too often

"Admiral Drake, feel the pain of Jess and Erza's victory The one who has the right to arm bears

"Let's all nominate Drake for admin" My boss promoting me

"For the web is dark and full of fincest" Still waiting

"u suk lol" Words of encouragement when playing Borderlands 2

"This is the nerd equivalent of a bunch of bitchy teenage girls." Pretty much sums up most edit wars

"Prepare to be pummeled cheerfully, jauntily, and utterly one-sidedly!" Some chick from Kill la Kill

"OMG A PENIS" Our glorious admin everyone

""a neo nazi posting on a Jewish board isn't a troll. Just an asshole" Troll Master

""tbh Enrik... I prefer BroOk over you." The Besty

"I'd fuck my own ass" Weirdy

"you want to shit like a targaryen?" Jade's reaction when I link something from thisiswhyImbroke.com

"does st live in op chat? need to start charging him rent" Some Finn

"your grandma is Turkish and has an iphone?" I may be adopted

"get a room plz. If not I will film it and sell it for moneh" I will think of something clever later

"id preffer being raped by staw than edit this wiki" Omai...

"pretty sure yaoi and catalonia comprise the two halves of Enrik's brain" Give this man's cafe 5 star reviews on Yelp!

"AoD, if I attempted to make popcorn in the outback, I'd either die from heat, lack of hydration, a kangaroo, a snake, or from the popcorn being mutated from the heat" I'll just get a candy bar then

"you are a girl. i am a hat. we are potatoes" True wisdom