The Mishandling of the Nine Red Scabbards 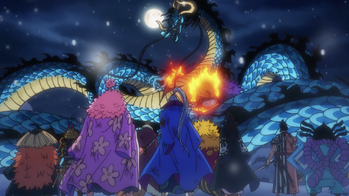 I feel like the Scabbards got the short end of the stick in the Onigashima Raid. We spent so much time with them, they get all this backstory and character development just to lose to Kaido offscreen. Personally, I think it should be the Scabbards to defeat Kaido since it is way more personal to them than to Luffy. But I get it Luffy always fight's the main antagonist. If Luffy is bound to take over the fight I didn't see why they had to lose the fight. I think they should have got the same treatment as Zoro, Kid and Killer. Fight the Yonko on a united front then split them up.

The Scabbards were integral to the execution of the raid. but I felt like that even gets undermined as the story goes along. Were told that as along as Big Mom. Kaido or any of his elite officers are still kicking that the raid will end in failure. If they can't defeat Kaido have them fight Kaido's elite forces. The All-Stars and Tobi Roppo combine make nine the same number as the Scabbards they even had a traitor in the group. Why do Nami and Usopp have to fight the members of the Tobi Roppo? I think it was a waste since Big Mom did most of the damage. Inuarashi gets the honor of taking out a weakened Jack.

To me the equivalent is if Tsumegeri Guards got that level of build just to end up the same way. I think the Scabbards should have died fighting Kaido if they don't get to beat him or beat his elite officers. On the other hand, I do like the new angle Oda is going with the story. The Scabbards are metaphorical ghosts, they believe they should have died with Odan and now live only to avenge him. Usopp does call Kin'emon and Kikunojo on that. I feel like it could have been executed better.