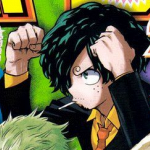 Hi and welcome to the One Piece Encyclopedia! Thanks for your edit to the Boa Hancock page.

i know im not the user you asked but i just wanted to let you know you should make a header for your question on the df in question's talk page--Quoth The Raven "Nevermore" 00:21, August 25, 2013 (UTC)

It really doesn't matter, just as long as it makes clear from where the difference in years is being taken. Meaning, as long as it says "8 years before the start of the series," rather than just "8 years ago", the latter of which would be wrong.DancePowderer Talk 22:07, April 13, 2014 (UTC)

Until there's proof of that, by which I mean the translated SBS, it stays off the page.

Over the last year or so, we instituted a policy where if there was an edit war over an image, we would revert to the version that was in place for a set amount of time (that I forget the exact amount of time, either 7-30 days) while a discussion takes place on the talk page. The Gear 4 image was edit warred on too much, and the manga version was the most recent version in his case. JustSomeDude...  Talk | 19:48, January 26, 2016 (UTC)

One of the general rules is if there is a potential edit war trying not to revert too much to clog up the recent changes with too many edits. This is why I stopped after 3 reverts and also why I had to contact an administrator to help deal with this. I am only letting you know as a friendly warning. -Adv193 (talk) 20:53, June 12, 2017 (UTC)

Also one helpful thing to remember is look at the Help Section at the top of the wiki and use it to find the list of administrators. Usually one way I pick carefully is if there are any recent edits made by either one of them or a content moderator on the recent pages to know where I could send a message to like I did today once my 3 reverts were up. But yeah this option is a good way to avoid getting dragged into an edit war.-Adv193 (talk) 23:13, June 12, 2017 (UTC)

Retrieved from "https://onepiece.fandom.com/wiki/User_talk:4orty5ive?oldid=1426383"
Community content is available under CC-BY-SA unless otherwise noted.