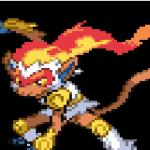 You're not helping your case by continuously putting it on my talk, you can either take it somewhere else or stop altogether.   NewWorldWarrior  Talk  10:20, July 19, 2013 (UTC)

You removed the warnings Staw gave you. Nova and I undid it, but you continued to delete the warning. So this is a warning, you are not allowed to remove any messages from your talk page. The only exception for it is archiving your talk page.  Jademing  Talk   18:49, August 19, 2013 (UTC)

You was blocked for removing your messages, plus editing others' messages, which are against the rules on here, and despite multiple warnings in both edit summaries and on your talk page, you blatantly ignored us and continued deleting messages/editing others' messages. So for the love of God, learn the rules around here, and stop breaking the rules, else you'll warrant an even longer ban.  Jademing  Talk   22:23, August 19, 2013 (UTC)

It has caught my attention that you've been removing your talk page messages over and over, despite of the multiple warnings being sent to you. As by now, I am sure that you already know that deleting talk page messages is not allowed. You'll be banned once again if you wont refrain from doing such action. No matter how much you hate the previous messages sent to you, you cannot do anything but to accept it.
--ChokokuguzaNoTobira (talk) 22:57, August 29, 2013 (UTC)

It's not that we don't want you around, it's that there are rules on this wiki that users have to follow. If they don't follow them, there must be consequences or there's no point in having rules in the first place. But since you ask, I very much doubt that you will be missed. It's recommended to throw away socks after a year 23:17, August 29, 2013 (UTC)

You just got unbanned and you're already vandalizing your talk page again! Are you fucking serious?  Staw-Hat Luffy  Talk  07:35, October 4, 2013 (UTC)

Retrieved from "https://onepiece.fandom.com/wiki/User_talk:Firebreather628?oldid=1577627"
Community content is available under CC-BY-SA unless otherwise noted.