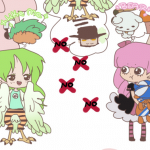 Hey there! Sorry, but you are not allowed to upload

If you want to use pictures in your profile please use those from the wiki or upload your images on another site (like photobucket, imageshack, etc.). Please read the Image Guidelines before uploading any more images to the wiki. If you have any questions don't hesitate to ask.    Neo  ♠  Witch   18:38, February 5, 2012 (UTC)

Yata deleted what you added to those pages because that is what we call SPECULATION, the word is the same in German, "Spekulation" and that is not accepted on this wiki. I repeat myself, that is the reason why the admin removed what you added, you added speculation.   リ チ ャ ー ド   Strong Fist «ℑ» «ℜ» «✩» «☯» Mornin'! ™15:56/7/Feb/2012 (UTC)

ahh okay in understand :) but keimi has say that every mermaid can talk with fisdh thats a basic ability Horohorogirl 19:54, February 7, 2012 (UTC)

That pic you've uploaded about the Shari Shari no Mi is a fan-colored image; the real power was shown only in the manga, and was not colored. Fanart is not allowed, so please refrain from doing it anymore. Yata Talk to me 19:53, February 18, 2012 (UTC)

Please, read the brief image guidelines before you upload. The full bison image is poorly named, you update old images instead of adding a new one, and if you're gonna take from another wiki, at least take the image at full size. Yata Talk to me 20:02, February 18, 2012 (UTC)

Don't think so, otherwise other people would've uploaded it already. If you find it, you can update that image, that would be nice. Yata Talk to me 21:18, February 18, 2012 (UTC)

I was thinking we need snipping tool to cut out a picture from a epsiode ... how you do it ? thanks for trying to find the picture :) admin-samaHorohorogirl

On second thought, no. That picture serves about no purpose for the actual fighting style, and is poor quality. Also, it isn't 99 people in there. Sorry. Yata Talk to me 12:15, February 26, 2012 (UTC)

We actually had a talk about that in the past, and I agreed with deleting those ??????. However, somebody else apparently want to expand the templates, or only having one member there seems to be too small. Maybe you could start a Forum to talk about it, or any issues you may have. Yata Talk to me 09:04, March 3, 2012 (UTC)

Can you please stop uploading low quality images? those images are not good for this Wiki and so we have to delete them or find some better Quality images ourselves. If you don't have a good quality image then just don't upload it. A low quality image doesn't help, even if it's the right image. --Strawhat1 10:17, March 4, 2012 (UTC)

uhm, how do I tell you this Steve is already there but under the name stevie. Are you sure his name is steve and not stevie, if so please ask an admin to rename that page instead of creating your own. (OnePieceNation 19:08, March 15, 2012 (UTC))

I see the problem is taken care off, please remember for next time to always check and check again if something is already there, and also only admins can remove/rename pages. (OnePieceNation 21:42, March 15, 2012 (UTC))

ask me about characters next time. Edit

the person you are now referring to isn't a doctor he is the owner of a carpenter shop, and usopp goes to buy wood from him, he is a fromer bandit and his name is Happa. PS: I have the databook myself and all of the newly named characters have now been added to the wikia. All of them now have their own page and all of them are now included in the in canon character list. Currently the only thing left to be done regarding the databook are the rest of the birthdays and I am currently working on that.(OnePieceNation 13:33, March 24, 2012 (UTC))

You keeg uploading low quality images, and they are not good for this Wiki. If you don't have better quality images, then don't upload images. Strawhat1 04:17, May 29, 2012 (UTC)

Retrieved from "https://onepiece.fandom.com/wiki/User_talk:Horohorogirl?oldid=1575822"
Community content is available under CC-BY-SA unless otherwise noted.