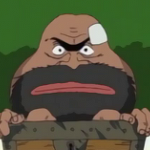 aka Gaimon aka LG

I'm aware that that cover story shows them with the Marines, being bribed with food to give the identities.  But nowhere is it stated that they actually joined the Marines afterwards, and the Unluckies page details as much.  That's the only reason I put the "Confirm" label there. The Dreamer (talk) 20:29, February 19, 2015 (UTC)

I just discovered the gif on your profile, and it is absolutely amazing. But then your talk page topped it off. JapaneseOPfan :: Talk 15:55, March 15, 2015 (UTC)

Now THAT is planning ahead The fiery destruction of Photobucket incarnate 15:18, April 28, 2015 (UTC)

Retrieved from "https://onepiece.fandom.com/wiki/User_talk:Lord_Gaimon?oldid=1246274"
Community content is available under CC-BY-SA unless otherwise noted.