Hi, I'm from the Wikia Entertainment Team, and we're modifying the Mediawiki pages of the top 200 wikis to better optimize Google search results. This will help drive more traffic to your wiki and improve your Google ranking. Shawn (talk) 00:10, 4 August 2009 (UTC)

These three pairs have the same personality. These partners are always fighting each other

More likely coincidence that Oda made due to the Baroque Works and CP9 guys being the opponents of the Straw Hats. However that's as far as it goes. Zoro's honorable, Mr. 1's an assassin, and Kaku's a carnivore in denial that he turns into a herbivore. Saqnji's a skirt chaser, Mr. 2's a pants chaser, Jyabura's a liar that says he's Robin's big brother.Mugiwara Franky 09:33, 13 August 2009 (UTC)

hey, can you give me list of main events thats need image those from (Loguetown-Thriller Bark) thanky you. Coldhandzz 02:05, 16 August 2009 (UTC)

Why did you undo my Moria edit? Edit

Why did you undo my edit on Moria? I corrected various grammar and punctuation errors under his appearance section that made the writing much more logical and flow. I'd like it if you'd explain to me your problems with my edit. Sables 04:04, 16 August 2009 (UTC)

Do you have any objections to me making animated gifs of certain devil fruit users for their pages?

Yeah but until the chapters out, theres nothing we can do. This was one of our fundimental rules from day 1. We (or was it just me???) did try to strike up a discussion on spoilers and nothing came of it. I find it annoying AP won't give us some slack.

Also that sanji article on his style got switched to black leg at some point AGAIN. Red leg is his ONLY announced style name so far and THAT was from Zeff's own related info. Sanji's style has never been named. Forget our other correct articles, AP just picks up on our bad articles all the time, I get really annoyed. I've warned them in the spoiler topic that we will ban IPs if they attempt it again. Lets see what comes at that, we should not be attacked at a forum like AP.

I don't see the Naruto wiki or others get attacked as often as we do. Its mostly egos here and because there is "better" articles out there. Even the "better" sites make mistakes and AP itself is not doing much. They ban anyne attempting to edit that they don't like... What are we suppose to do. We're left handling the things everyone else won't keep p with. Thats week by week edited info and updated. Also we have to scour all their sites for info because unlike many other wikias, we're left at the bottom when it comes to giving out info. Seriously, I can name several others that are regarded with better treatment then ours. ^_-

If they don't want to attempt to follow our rules we may have to enforce them hrasher. This is getting silly though you have to admit, now their editing to be annoying rather then helpful. One-Winged Hawk 17:16, 19 August 2009 (UTC)

Couldnt' remember the discussion, forgot to check the discussion page (slip up). I though red-leg was confirmed though? I mean, what else do we call it if they don't even like it? I don't get their drift. Though I still recall it being Red leg... ^_- One-Winged Hawk 18:11, 19 August 2009 (UTC)

[2] When I click that image instead of showing a bigger one of the recently uploaded one it goes back to the previous image. Is there a reason for this? Drunk Samurai 18:52, 19 August 2009 (UTC)

Just let me know of any pages that need attention. I'm quite adept at writing and am open for minor edits etc.Sables 10:57, 20 August 2009 (UTC)

It’s the same Pacifista you can see that here http://img29.imageshack.us/i/onepiece404.jpg/ images from episode 404. What is the point to write here anime and manga similarities,about leaving the same cliffhanger ?--Tipota 08:36, 26 August 2009 (UTC)

I have the Transport Stream file and I can easily see those ‘’yellow streaks’’ are actually scratches. Ok maybe the previews pic wasn’t clear, here is a frame from episode 404 ts file without resize (1440x1080).

Yes the scratches (yellow streaks) are in different places. For this you should blame Animation Director: Naoki Tate. If you watch again the episodes he made you will find many of these ‘’mistakes’’, he change people characteristics often, this is his style.--Tipota 17:21, 26 August 2009 (UTC)

I am sure the yellow streak are scratches just watch Pacifista before Law ‘’finished’’ it, the placement of the yellow is also in different places.

Kid's and Law's conversation? Where exactly? Which dialogue? If you are talking about the point after Law ‘’finished’’ Pacifista they referred to marines not to another Pacifista. I can’t find something else to prove that you say. So it’s just Speculation.--Tipota 00:41, 27 August 2009 (UTC)

According to you they fought 3 different Pacifista. On episode 401 Kid defeated the first but immediately another one in good condition appeared behind him. Also on episode 403 and 404 Killer creates scratches on Pacifista body but in the next scene you can see Pacifista without any scratches. So go ahead and change the article and write they fought 3 Pacifista. I already told you animators change their characteristics often Animators didn’t change the story they left the battle without winner just like in the manga.--Tipota 08:14, 27 August 2009 (UTC)

Chapters and Volumes I realized that translation for the first 21 volumes replaced with Viz tittles (with few exceptions) is this ok? Now many of the chapters here don’t have proper translation. I think it’s better to create two columns ( 1 -translation(Kanji) 2-Viz title ) or to create another article for Viz releases just like Episode Guide. Also the only information about UK version is release date.--Tipota 11:44, 27 August 2009 (UTC)

I was going to edit the Chapter name to put the !! in but went I went to edit it I noticed it was already there but it doesn't show up on the actual chapter page. Instead it only shows the Chapter name without the !!. Is there a way to fix this? Drunk Samurai 20:17, 27 August 2009 (UTC)

all it wants to do is add fresh uneeded lines, even in places where there already is some!

hre is some taste of my spoiler.HAHAHAHHAHAHAHAHAHAAHAH 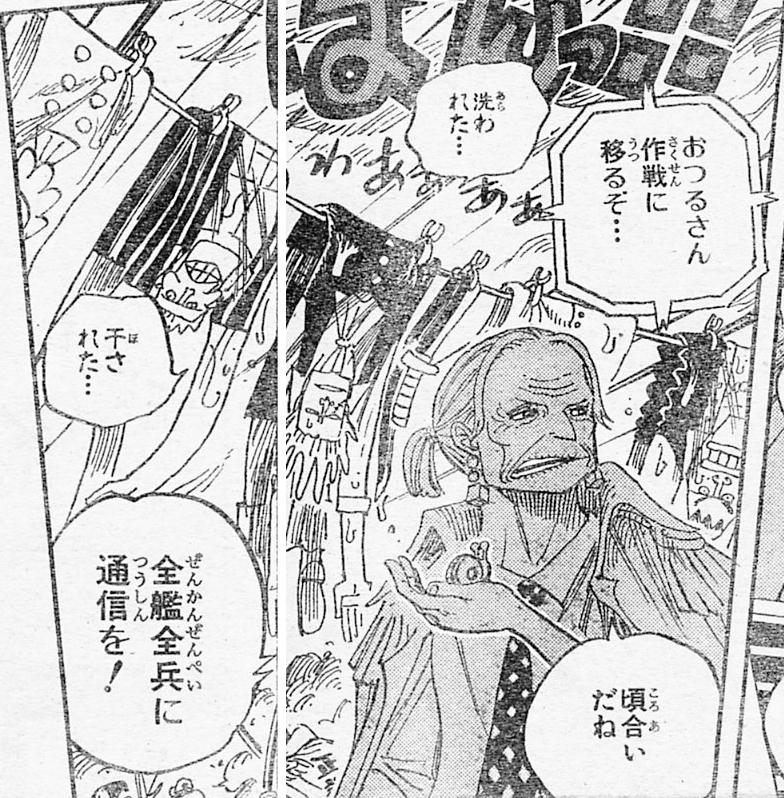 Images being loaded by Sables Edit

Using the same images Toei has is just like we compete/copy their site. I think we shouldn’t make use of their images. Only a few images in which there is no clear picture from the anime.--Tipota 09:37, September 8, 2009 (UTC)

I'm sure they fall under the free use rule. They're as much usable as pics from the manga or the anime taken snapshot through the internet. Though stating the source of where the images are taken from would be a polite gesture.Mugiwara Franky 09:40, September 8, 2009 (UTC)

In response to Tipota; I was unaware that those images were being used on the Toei site. Apologies for not stating the source, they were publicly availible settai via arlongpark forums.Sables 09:54, September 8, 2009 (UTC)

Its mostly aimed at people who walk onto a website, and just take images from them that carry ownership and posting them here and then for us to have a unhappy owner come here and start a fight. Theres no way to avoid TV, DVD and sub watermarks so their fine. That reminds me, we should have that on image guidelines, right now its written as all such watermarks are bad. One-Winged Hawk 17:44, September 9, 2009 (UTC)

Even if they don't contain the watermark (which tends to appear only if you direct link to a vid), they still insist they own the image. Heck, the onl reason why they allow the direct links is because of their watermark. Anyway, images that come fromyoutube are normally too poor quality to do anything with, we'd not know if it didn't come with its watermark anyhow. One-Winged Hawk 07:37, September 10, 2009 (UTC)

True, HD never was an option until recently for example on Youtube. It used to be the rule that it must be only ten minutes long and be a certain file size. Regardless, if the image didn't have the youtube link anyway we'd be none the wiser. So if it came direct off the site and not via a linked vi, we'd be none the wiser. So why would there be a problem? One-Winged Hawk 07:12, September 11, 2009 (UTC)

End the war with the Apis page between DS and Joekido please MF. Despite everyone talking, DS is remaining persistant on the issue. I'm not saying who is right or who is wrong, but I don't about you, its getting annoying. One-Winged Hawk 18:20, September 9, 2009 (UTC)

Hey, leave me out of it, after DS reverted the page I decided to not to touch the issue because I was sick of reverting his stupid edit and his stupid flawed logic and like you, I'm tired of him as well.

Not just the Apis page but also the Mohmoo one, DS' logic is terribly flawed and he keeps reverting images none the less to whatever we say.Sables 07:01, September 10, 2009 (UTC)

Apis and the Mohmoo pics are so so in my opinion. The only thing that makes them not perfect in my opinion are the slight shadows behind them. However those can be edited out if somebody gives the time. They're not perfect but can still be accepted to a certain degree.Mugiwara Franky 07:27, September 10, 2009 (UTC)

In a need of more staffEdit

It may sound rushy, however while you are a great adminstrator, there are need of more staffs. But this is not my choice yet I'm consired because your the only one who did most adminstator work and there are bound to be someone helping you to lighten your load. I talked with Uberfuzzy and he told me that in able for an One Piece Wikia adminstrator to make choics, someone needs to become an bureaucrat in order to make a vote and appoint more staff and I believe you'll make a fine bureaucrat but that dicision is up to you, if it's all right for Uberfuzzy to turn you into an bureaucrat. Battlefranky could be but he's around rarly so what dod you think?

And no, I'm not planning anything evil. This site is getting larger and larger and we need more staff to manage things around.

It could only be temporay anyway couldn't it be? MF makes a good Admin, if anything. But the call for more staff has been asked before, mostly because of BFs lack of being around. If we could get hold of BF just for a week, that would be long enough to elect another staff member. :-/ One-Winged Hawk 07:47, September 10, 2009 (UTC)

As far as it is concerned, if given the bureaucrat status, I'll just use it to hold elections. Other than that, I'll just continue what I've been doing both as an editor and as an admin.Mugiwara Franky 08:07, September 10, 2009 (UTC)

Retrieved from "https://onepiece.fandom.com/wiki/User_talk:Mugiwara_Franky/Archive_7?oldid=1233348"
Community content is available under CC-BY-SA unless otherwise noted.