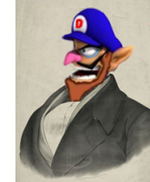 Umm, hello there. I noticed you moved a couple of articles without forewarning the rest of us. Now moving some articles to other titles without discussing first is okay in some cases, but there are some cases where you need to discuss first before moving. Discussion first is needed as some moves maybe uncalled for and may cause problems for other editors. Your recent move of "Merfolk" to "Mermfolk" in particular is such a case. There is no such term as "Mermfolk", with a m, in the English language and fantasy terms. As such, your move resembles almost like vandalism. Please in the future, discuss things first before making large moves like this so not to cause problems to other editors and readers alike.Mugiwara Franky 08:07, 19 July 2008 (UTC)

You broke the Marine portrait template when you edited it... Hmm....

I suggest you practice the alterations first:

One of the name ended up hanging over the edge of the rest (layout probs on that line), the lengthened names stretch out the portaits so the gap was no longer then 90 x 90. There wasn't room for 6 portraits on a singl line (hence why theres only five). If I listed them yesturday I would remember them all, today, I've just woken up five minutes ago and my brain is half asleep still. Can't remember exactly did right now wrong to get into the mess. Have a practice first before you edit if you still want to make alterations. Nothing really bad done to them, you just didn't get whatever you were doing right. --One-Winged Hawk 07:07, 31 August 2008 (UTC)

At One Piece Fanon we got a Tournament if you enter and win firts place you will become a Bureaucrat and a Administrator! I hope you enter it's a Tournament about the most creative Location!

Is that how admins talk to editors around here, or just you? I cleaned up a template. Having added the Mini-Arcs in the first place some years ago, I didn't like seeing them make too much of a mess when they got so numerous. So in a few hours, I reorganized the template according to the two official supersagas (Sea of Survival and the Final Sea), and divided them into their official arcs, with the mini-arcs organized according to the arc they first appeared in. I also renamed the Post-Enies Lobby Arc to the Return to Water 7 Arc, in line with the precedent of the Orange Town Arc, Syrup Village Arc, Long Ring Long Land Arc, and most importantly, Return to Saboady Arc. As a bonus, the template is now much more aesthetically pleasing. Well, it was. Plumber 10:57, December 29, 2013 (UTC)

We do not name articles based off of what Viz calls them. While Mororon/Morollon could go either way, Viz actually got Tacos' name wrong. His name in Japanese is タコス which reads as Takosu. Notice the s sound at the end? Either way, you should not rename an article without discussing it unless you are absolutely certain that the article's name is incorrect based on the Japanese reading.

Also, please be sure to read our Image Guidelines. Pictures with English text are not allowed; they must either have the text removed or come from the raw Japanese manga. Kaido King of the Beasts (talk) 02:10, June 1, 2018 (UTC)

Thank you for the information, and sorry for the trouble. While I have disagreed with the naming policy of this wiki for some time, I will abide by it. I did insist on the name in this particular case solely because I believe Oda and/or Viz intended the name to reference the famous LA King Taco chain, since Viz Media is a California-based company and the chain is quite famous for foreign tourists. Plumber 11:56, June 23, 2018 (UTC)

It was decided in this form to not replace manga images with digitally colored ones. Changing this rule would require another discussion. Kaido King of the Beasts (talk) 16:51, June 23, 2018 (UTC)

Retrieved from "https://onepiece.fandom.com/wiki/User_talk:Plumber?oldid=1505588"
Community content is available under CC-BY-SA unless otherwise noted.