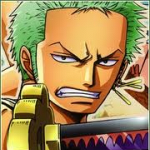 Hi and welcome to the One Piece Encyclopedia! Thanks for your edit to the User blog:Zoro-san page.

Do you want a signature Dice?Edit

MDM disagreed to receive the sword, but he said he will offer it to you.

My crew is finally done

I can come on chat occasionally. And hopefully I will be on the weekdays.. I love you~ ♥

Hey this is Lixis I got you into the taichibukai :D So get ready.

Message to the Vice CaptainEdit

Hey marimo,it's jason here.I am telling this only to you because i tust you more than anyone in this wiki.So i havent entered wiki for like some days completly (sorry for not making Shiryu turn).That was because i had no internet the past few days.but an unfortunate fact is that i ......liked it without wiki.the Wiki grew on me,and it has become quite the handfull problem for me.That is why im taking a break from it.no chat at all,no RPing at all,no nothing.I will once or twice come to check things up per week,but I womt be active.So im telling you this cause i think that you are the person that should know first.I really trust and think you as my wiki brother (and very close to real brother actually),so i think that i should have told you those things above.if you could,spread the news to the people that care.I hope that we dont get lost,i hope that you wont get angry.mainly,i am deeply sorry for not finishing the Shiryu fight,but i think that it was my "Κυκνιον Ασμα" (kiknion asma-the last act,a beatiful act,like a swan's death-it means for greeks the maximum that we reach,the best thing that we leave bhind,just be4 we leave).So yeah my fight with you was that,cause you see....i did everything,and much more.If i go beyond that,it will be too much,and i have grown sick of the Overpowerness too.

In any case,i wanna tell you a gigantic great big "thanks" for the wonderfull and epic time that you've gave me since september.It has trully been an amazing adventure,but right now,im havign my timeskip.SO ill come back one day,lot of stronger,lot of changed,ready to face you guys again and have fun with you all.If i have time,i might post a blog explaining in detail and saying a goodbye.

Marimo I just heard that you plan to leave, please don't. I know I play part in the reason why you plan on leaving, but i have to say I really am sorry. It does seem like I back stabbed you, I changed my vote, but I'm still sorry. Please don't leave, if you do, I'll really miss you and having those long conversations when we were on. I really need to talk to you, but not in the talk page since it's not that private >_>.... But please don't leave TT^TT    Calu 21:18, March 6, 2012 (UTC) chan

> . <; Hopefully tomorrow, for me, we can finally chat together. And about entering and leaving earlier, I was kinda sick and had to throw up and went straight to sleep. If there is anything else you want me to do, then I'd be happy to do so. Cya there!

Now let me discretely add; AS I FREAKING TOLD YOU! ^^

It seems there was no need for me to leave you a message. It seems I know you well enough to know you won't leave so easily.

P.S. I did do things to prevent you from leaving, Alphy and FMF votes for hungry made the tie possible and were made cause I told them too.

Now all that there is left to do is decide the tie between hungry and evan. Don't worry I'll convince THT I'm preety sure I can convince him to trade hungry

Marimo.... DP has just awarded the mod position to IH, and you will promise to leave afterwards.

So, when you leave for somewhere else, do tell everyone that.

I wish you all the best, and sayonara.

First letter of the greek alphabet is on the chat ^^

Ciaossu,Erik.As you noticed,i have read Reborn.I wanted to tell you something.After i finished bleach,i knew i wanted to see reborn since i had known frm you that it is epic.Since i didnt have the time to watch it,i read the manga.And just now i read teh last chapter.So i will come to the chat from time to time,since i also quit LoL(it was too boring for me,no goal whatsoever.XD)so then,im glad abotu somethings.I finaly know why MJ calls you Judaime,i know (knew it all along) how epic yamamoto is,and having read a new manga filled with abilites,I will come back stronger than ever shortly.Also,inspired by Reborn,One piece ofc,bleach, and psyren,my Crystal war manga will start the next monday.The chapters that i will make will be released monday and Friday.(ofc,not real manga,Rp style manga).SO in any case,i still will be gaming with friends,but just with aion,so i have some more free time.And as always,i loled at the way i wanted to finish somthing,and when i finish it i am like "awwww why did i finish it"XD

Ossu,Judaime.I just sayin' that we could meet today on war.Ill be there. XD

Srry bro! YOu were amazingEdit

DAFUQQQQ!! i cant believe it!!! in any case,i m jsut glad that you made the best fight ever out there,in our and in many wikis and RP sites.

Trully a draw for me!

Re: Happy B-day and moreEdit

Marimo, this time I'm not sure I can convince you back but, let me say thanks for the best gift of them all. Marimo probably you want me to take care of protecting her now but, she needs you more then me, if you still want to come back do it for Calu not just for me, didn't you say you were gonna be my reborn? I may be 15, but I'm still as good as the 14 me some days ago, you should have seen Caly's reaction when I showed the message you left on my bday message. Do as you wish, dispite everything I still trust your judgement above mine   MJ  AHEM what do you want?    22:55 14/Apr/2012 (UTC)

1) Rukia's Sode No Shirayuki (it's EPIC in real life)

2) Replica katana from "The last Samurai" ( hadnt ever seen the katana,but it was epic!

3)and a wooden Daiguren Hyonrinmaru XD (it's blade is black since it's for training,but it's HALLA EPIC!!)

And now that i have two equally long metal swords...........i can finnaly be called "The Nitoryu Tensai!!

Other than that,i read Future arc trailer.......too much epic! But pls dont even show or anything Magnus!! Its 16 years and in 5 years he dies!but ofc youu can mention him!And i forbid any thing like reviving Magnus!

Chaos zoro just wondering are you stopping the fisht or something , if you are no problem then :D :D or are you panning something to make the fight more interesting Jaimini•626•Talk ✩ http://i1175.photobucket.com/albums/r631/jaimini626/WatchOnePieceEpisode531EnglishSubbed-WatchOP1.png 16:52, April 23, 2012 (UTC)

Catch your turn in the morning... Edit

Sorry sorry sorry .. .. well I read my message but .. I couldn't answer it cause .. I LIED WHERE I SAID THAT I CAN ARRANGE A BATTLE BETWEEN YOU AND BLS!! TT^TT sorry Marimo, I knew it was impossible to convenience you with words and stuff so I had to use something that interests you the MOST!!Sorry for using such cheap trick >_> its just as you say .. BLS is busy with school and rarely gets time to anything .. he even stopped making predictions (_ _ ) he said that he will join the wiki time to time but thats just a guess. Thou If you want I can put a request on his talk-page regarding a challenge note from you to him for a RP BATTLE!! So sorry for the dirty trick and let me know if you want me to send him the challenge memo!!

Yohohoho... good one MDM! You got his attention all right. One just need to mention something regarding RP and it totally gets Marimo on the hook! And to make it even more tempting, you add in the legendary BLS!!! CLASSIC!! ^_^ YOHOHOHO!

And poor Marimo-kun, you can see he's all hyped and excite about it... until knowing it was all a lie... There there, Marimo-kun *pats on the shoulder*

Thank you very much for the Bday wishes! I can't believe you remembered it:)

Hope to see you in chat sometime:P

I was on the chat earlier but I didn't see you, sorry:( May be, I will see you later today:D

Sorry little Bro :( I was not ignoring you, I was multitasking! And I did respond to your messages:P Zori9

I just noticed I just noticed you PMed me... I actually wasn't exactly on chat when you came on, so I wasn't ignoring you. I was watching a show, and had the chat opened in another tab. I usually just check in once in a while. And, yes, I do remember you, but haven't seen you in a long while. I barely come on chat now, and if I do, it's usually late and I stay for a little while (except those days I stay up all night like today).    Karoo    ❖    Talk    14:53, August 19, 2012 (UTC)

It's fine. Oh that's why. Hmm maybe if I we are on the same time. School starts for me next week, and since I am going to start high school, I have to wake up more early and go to bed early. So, I now have to start practicing going to bed and getting up early. The big problem is my insomnia... Oh well. I also picked the highest and hardest classes, meaning I'll probably be on less due to studies and what not. I don't know how we would communicate with each other, probably only weekends.    Karoo    ❖    Talk    23:51, August 19, 2012 (UTC)

Thanks a lot big little brother ^_^ The Humaniod Typhoon Talkco

Hey... no fair! I am suppose to be the first to be wishing him birthday... BTW, isn't his birthday not until tomorrow Wed 7th Nov??? Many happy returns Marimo. If I feel the mood, I will come find you to spar (RP) again ok? :D

YOOOOOOOOOSH!!! KONOYARO BAAAKAYAROOO!!! UBEREPICAWOSOMELGEGENDARY HAPPY BIRTHDAY!!!!!!!!! I hope you're having fun, since it is a realyl special day! And oh well

Happy birthday, Marimo! Sorry I couldn't get your present completed by today, but I'll give it to you ASAP! I promise! ^_^

Happy birthday and a sad day...Edit

ciaossu , I wish you a happy birthday , but I am really sad too as reborn ended .

Mornin Dice, http://www.mangapanda.com/215/medaka-box.html is the big shot series I was talking about.

and  this awesome series http://www.mangapanda.com/yamada-kun-to-7-nin-no-majo

also one of my damn favorites from the same author as the previos one http://www.mangapanda.com/874/yankee-kun-to-megane-chan.html

Also the book "Electric Ant" by Phillip K. Dick. Remember the name of that author he's damn awesome. Good luck and I'll try to find some time for the next turn :D.

I still havent decided about wat i would like for the future of Milky but i think i owe it to u to have one hot blooded fight. I leave the preparations for it to u and Swim. My computer time is limited but i will fight u. Only after its done will i truelly know what to do about Milky. Zehahaha!!! Let me know, Marimo!!! *warps away*

Retrieved from "https://onepiece.fandom.com/wiki/User_talk:Zoro-san?oldid=1045491"
Community content is available under CC-BY-SA unless otherwise noted.